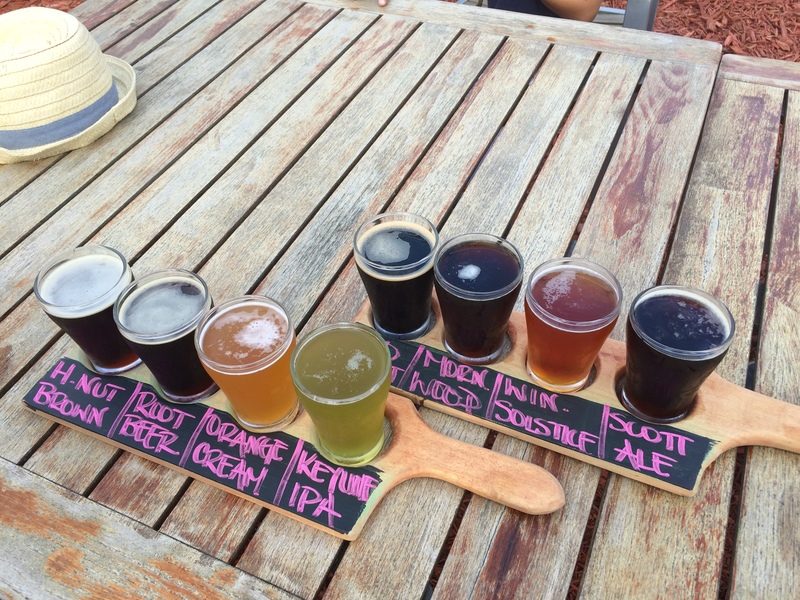 It could be our enviable “Sanfordability” but it may just be the shear fact that Sanford is this quaint and unique, walkable historic gem that makes breweries favor our town over many others in the area. As Sanfordites we can call ourselves very lucky that we live in what many already call “the brewing capital of Central Florida”. As of now, Sanford is home to one brewery, but two more are set to open very soon. By the end of 2016 we will be able to comfortably walk from brewery to brewery in our little town, and this will surely attract visitors from near and far. 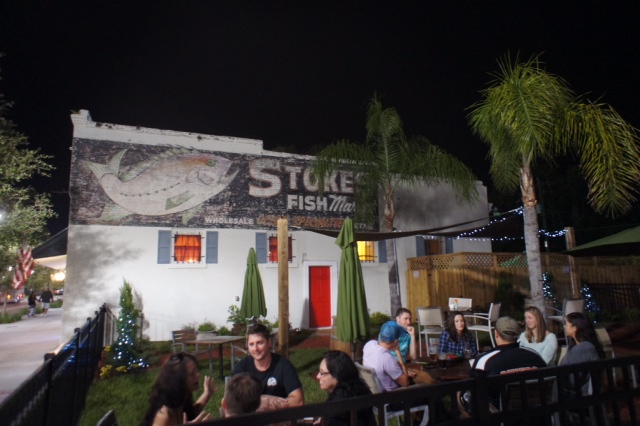 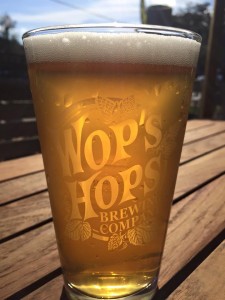 The very first brewery in Sanford opened its doors in the fall of 2014 and we couldn’t have been more thrilled! Located in the historic Stokes Fish Market building, a local landmark, this micro-brewery with dog friendly beer garden has already become a Sanford staple. Owners Greg Piecora and Peter Minelga welcome everyone here as their own “famiglia“, a concept that Greg, who is of Italian descent, proudly implements in his everyday business. Where else can you bring your own meats and fire up the grill as you enjoy a lazy Sunday afternoon sipping a cool beer?

Wops Hops recently took the adjacent building space formerly operated by Shantell Williams. They will soon convert it into a comfortable seating area for an additional 40 guests and a small stage for indoor live music. Eventually they plan on serving quality bar food and will also have guest chefs  prepare delicious menus during food and beer pairing events. 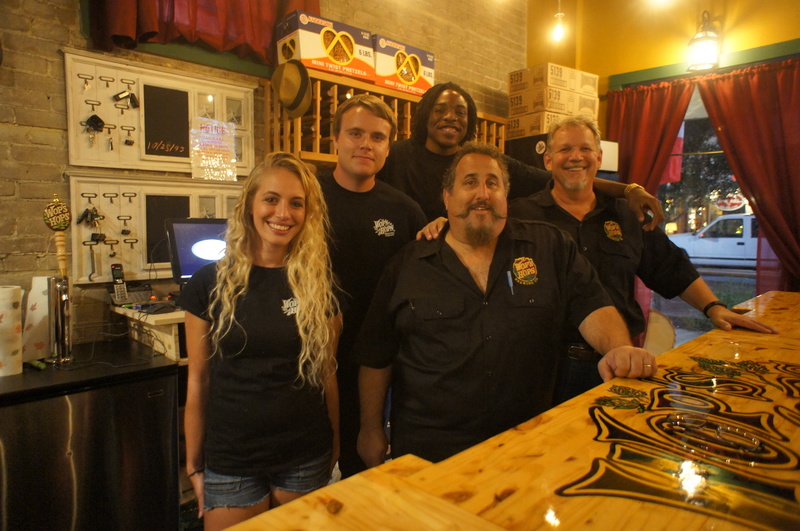 “We are taking our growth seriously and slowly.” says Greg. “Our reputation for quality beer has been far reaching and we intend to constantly challenge ourselves to produce better beers and to provide our guests with a comfortable and enjoyable atmosphere.”

Wops Hops plans to open a larger production brewery in the future somewhere in Sanford while keeping their current location for test brewing, one of a kind ales, and mead making (Honey wines). The production brewery site will allow them to produce larger quantities of beer for canning and bottling as well as kegs for distribution. 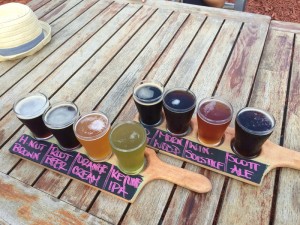 Sanford Brewing Company is the second brewery to open its doors in downtown Sanford. It is located on the corner of 4th and Sanford Avenue in a 4,500 square foot building from 1930, which previously housed “Forrest Gatchel’s Cash Grocery”. The building has incredible terra cotta tile walls, a terrazzo floor and 14’ heart pine open ceilings, which the owners Chris and Robyn Esser are working to keep intact as much as possible. 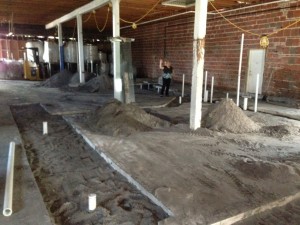 Sanford Brewing will be the largest brewery in Sanford with two brewing systems, a 15 bbl* and a 3 bbl steam brewhouses, and 16 fermenting vessels, 8 at 15 bbl and 8 at 3 bbl.
“We intend to serve exclusively to our tap room initially and move into distribution after we are satisfied with our quality process.” says owner Chris Esser. His wife Robyn adds “We’ll also have a restaurant serving upscale bar food to accompany our beer. We’ll have 24 taps total and will probably open with 6-8 of our own and the rest be “guest taps” until we have time to brew enough to support 18 taps with our own beer, leaving the other 6 to guest taps to spread the love and support the local and regional brewing communities.” The couple intends to to apply for a vintner’s license shortly after opening which will allow them to brew mead and ciders as well. They expect to be distributing around Central Florida by the end of the year and open additional locations after that. 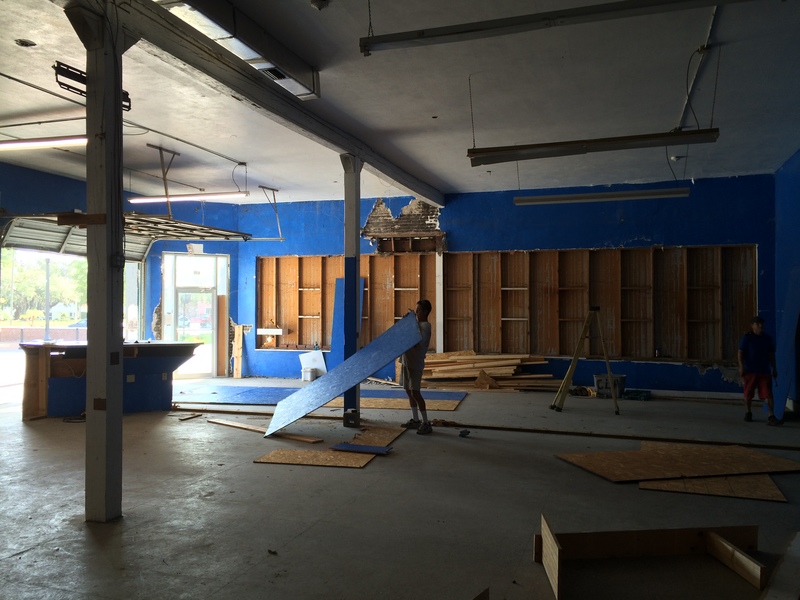 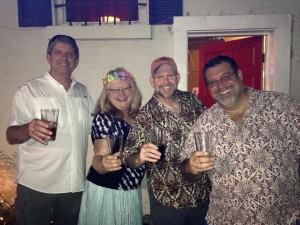 The City of Sanford recently provided Sanford Brewing Company with the maximum CRA funds for both the interior renovations and exterior work to uncover the stucco covered brick. What makes the brewery special as well is their love of “LOCAL”, be it local food,  local talent, local music, and local art. Speaking of, a local craftsman is going to build out the bar in the Mission/Stickley style reminiscent of the downtown Sanford historic district. In addition to that Sanford Brewing has engaged a local sound engineer to ensure the best quality entertainment so guest can enjoy awesome beer ad wonderful food in a great environment.  To top it all off, Sanford Brewing Company is making an effort to be environmentally friendly. “We have already been in contact with farmers to take our spent grains to feed their livestock. In addition we hope to re-use some of the spent grains on custom bread for our taproom restaurant.”

Sanford Brewing is tentatively scheduled to open this summer with a big street party and live music (check Sanford365.com for updates) 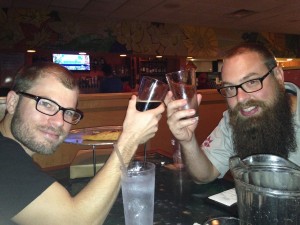 Last but not least, Inner Compass Brewing Company, consisting of the dynamic brewing duo Dylan Bashore and Robert Turner, is working on opening their micro brewery by the end of 2016.

At Inner Compass Brewing Company’s taproom and beer garden guests will get to try Pale Ale, IPA, Milk Stout, Saison, Kolsch, Hefeweizen and more. Inner Compass Brewing Co. aims for quality in their beers no matter how many styles of beer they brew. Food will at first be limited to cold cut sandwiches and snack foods like pretzels, but there are plans of teaming up with local restaurants and food trucks occasionally.

“Our goals for the next few years are to continually increase the number of people visiting our taproom and downtown Sanford and also expand our brand/beers into the surrounding areas once we have a strong following going. We want to sell the majority, if not all, of our beer out of our taproom during the beginning.” says co-owner Robert Turner.

Watch this video to see the latest progress on construction:

“What makes each of these breweries so special are the individuals brewing the beer and running the show behind the scenes. Each brewer and/or owner has their own individualistic style and ideas that they bring to life when they make their beers.” Dylan Bashore, Co-Owner Inner Compass Brewing Co. 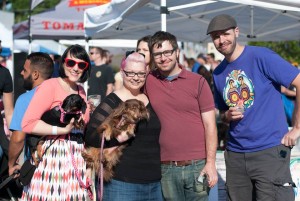 April: Brews Around the Zoo

I think we can all agree that in 2017 Sanford deserves the first of many legendary St. Patrick’s Day street parties! After all, just like the Irish, Sanfordites now have earned a reputation as beer lovers and connoisseurs. And don’t get me started on Oktoberfest… Sanford already has one of the biggest in the entire Central Florida area. Let’s blow it out of proportion, shall we?

*BBL stands for “barrels.” A barrel of beer is 31 gallons and the standard size for a keg is a half barrel. 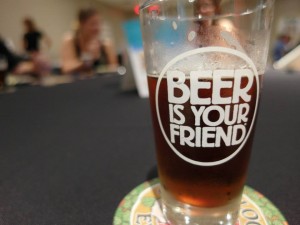 Other places where you can drink fabulous beers in Sanford:

Or simply brew your own:

Sanford Homebrew Shop (115 S Magnolia Avenue): where some of the greatest have learned brewing their own beer! 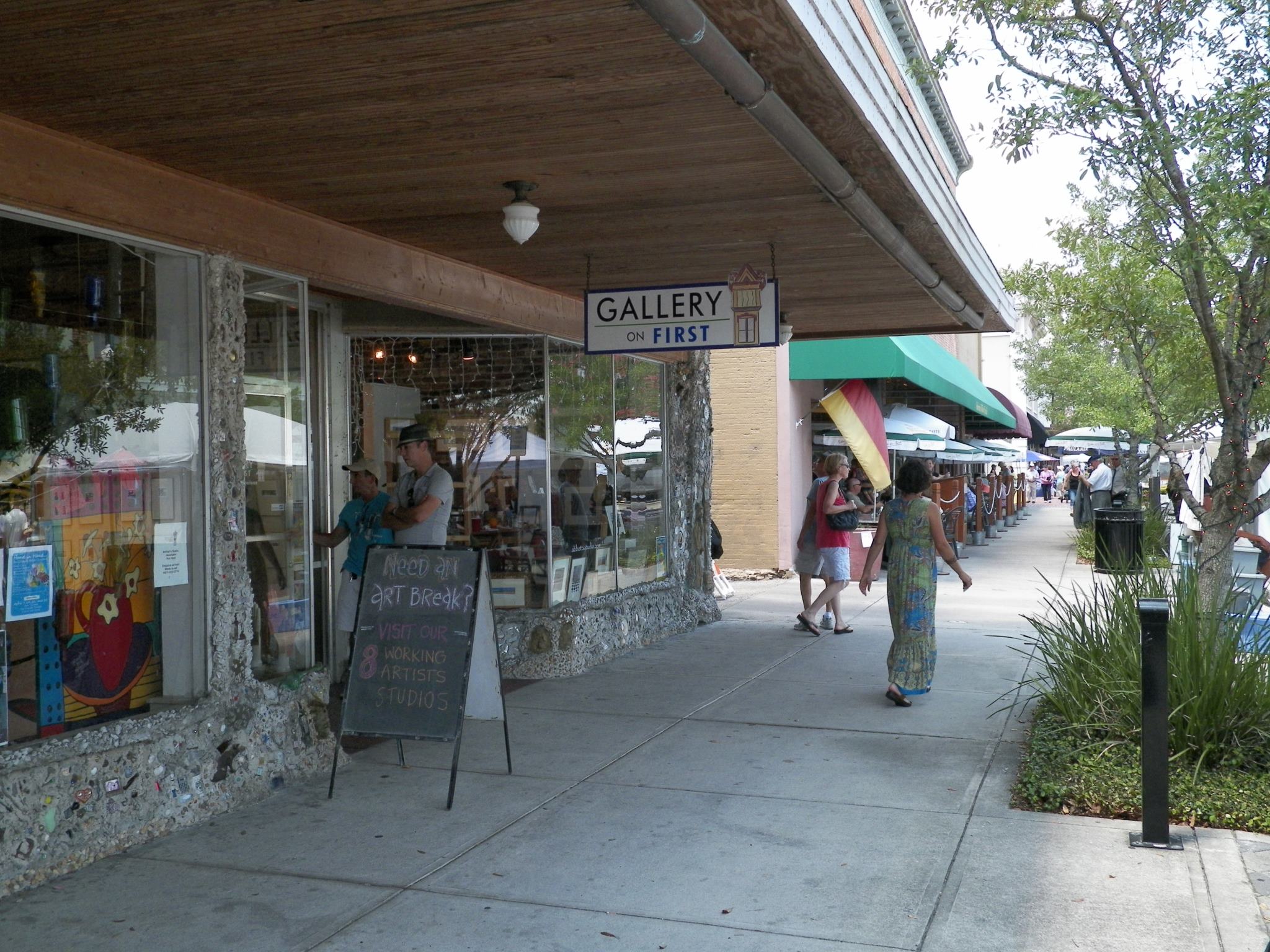 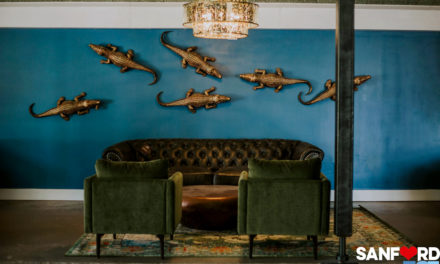 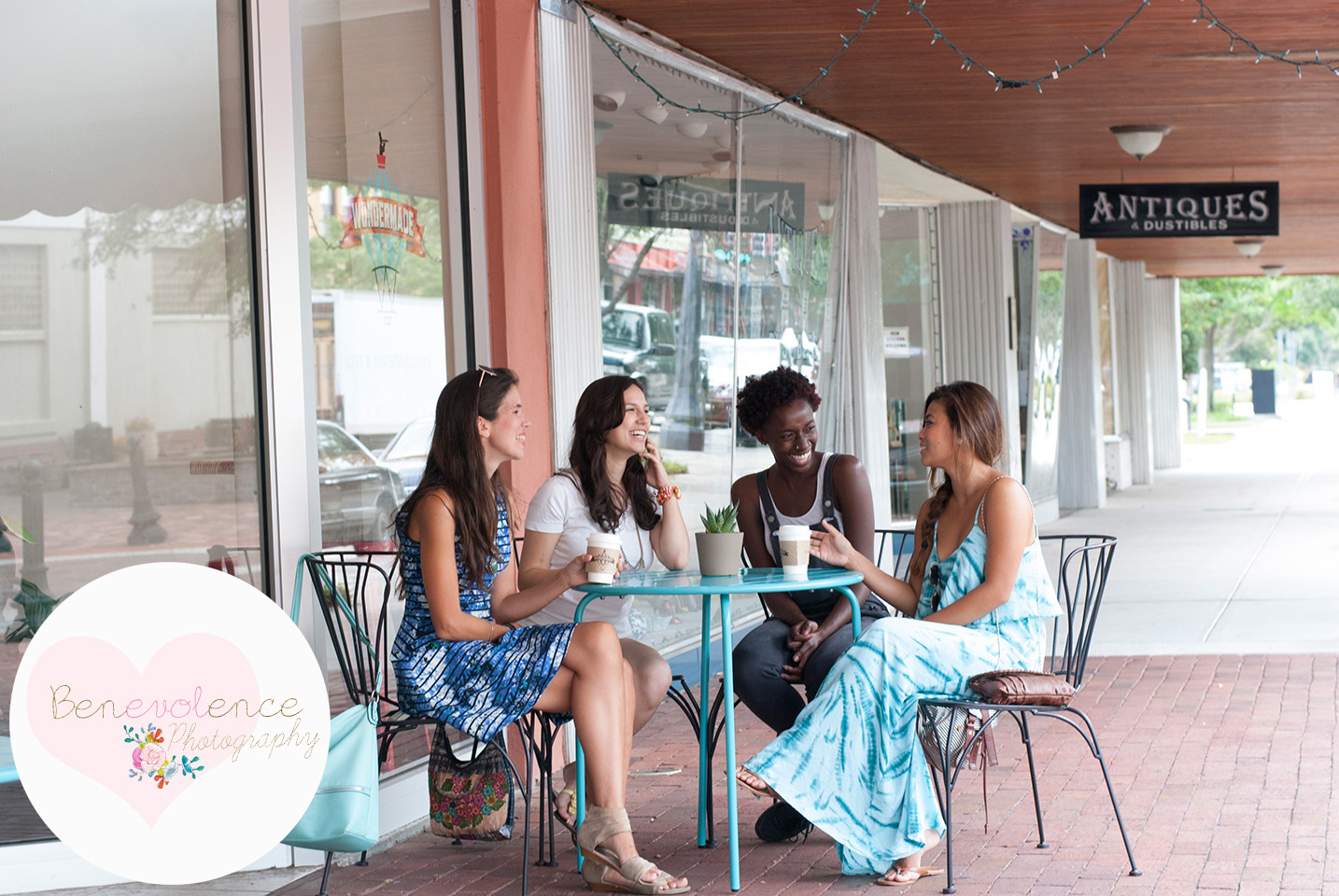 Welcome to 2100 Magnolia Avenue! This 3/2 MOVE IN READY historic bungalow is nestled on a corner lot beneath a stunning mossy oak canopy on beautiful Magnolia Avenue in Sanford’s desirable GOLF CART ZONE. This adorable home has been completely update

This is a beautiful 3 bedroom, 2.5 bath split plan lake front home situated on the desirable Lake Markham chain of lakes! This home was built for and lived in by the original and current owners. This home features a wood burning fireplace , ceramic

Come take a look at a home that is in a PRIME LOCATION and MOVE IN READY! Welcome home to vaulted ceilings, an open split floor plan, with all neutral wood tile flooring. The lovely home sits in the back of a cul-da-sac in Forest Cove and has an encl