An Interview with Pauli and Harry from Buster’s Bistro 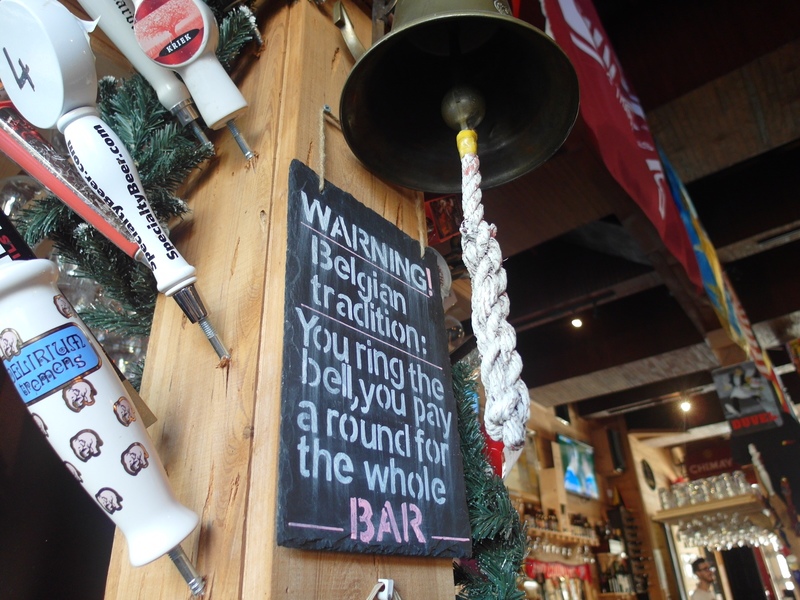 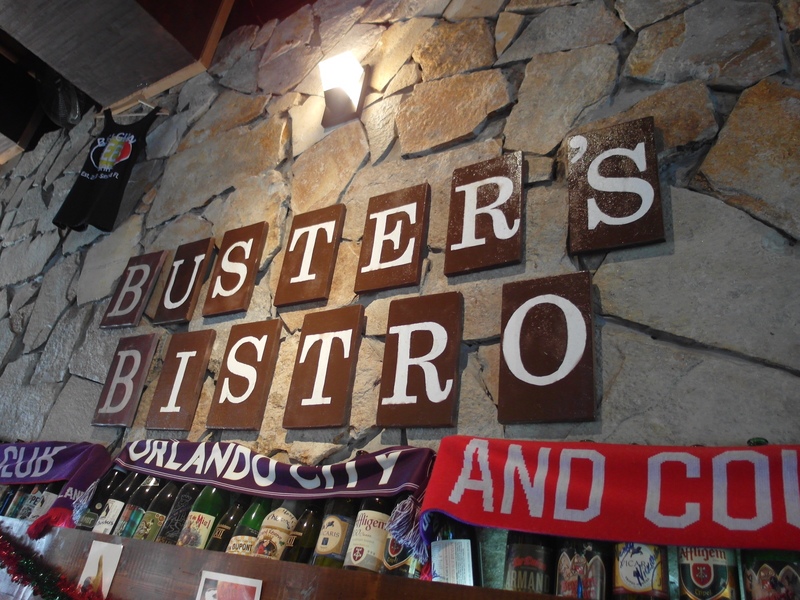 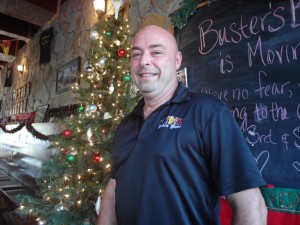 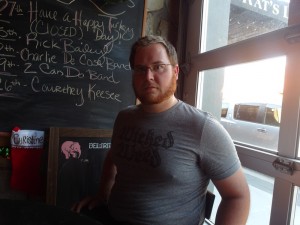 This was very obvious as I sat down with Paul (affectionately called Paulii by his many fans) and his counterpart Harry Graham for some questions about their business, their upcoming move, and beer. As we discussed Buster’s and the intricacies of owning a Belgian beer bar in downtown Sanford, the two sparred and laughed like an old married couple, the perfect example of the sort of down to earth, familiar interaction you can expect from the Buster’s crew. In the year and a half it’s been open on Sanford Avenue, the bar has earned a strong reputation as a neighborhood hangout, and most Sanfordites count the personable staff among their friends. 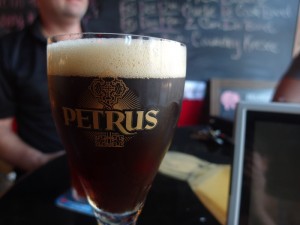 Just in case you don’t know Paulii and Harry personally, I asked them to introduce themselves via their favorite beer from the bar.

Paul: Mine is the Belgian Quad. Strong and sweet, just like me.

Harry: My favorite is the Troubador Westkust. I’m dark and bitter.

….which should give you an idea of what I’m managing here. It’s not every day I interview my friends, so I took this opportunity to ask Paul and Harry some questions I never had. I mean, usually I’m too busy sipping Petrus and having a good time to worry about details with these guys. (Disclaimer: To answer your question, why yes, we were drinking the whole time.)

S: I don’t know your coming to America story. Where did you come from, Paul?

P: I came here as a tourist, and I loved it here, met a bunch of nice people, and decided to stay. So I went home, talked to my wife, and we moved here in 2000. The friendliness of the people here, just going to Publix, it blew my mind. Here, you go to Publix, you buy something, and people ask how you are. I just thought how awesome, where I come from people are like, “move it, move it”. I loved everything about Florida.

S: Is there a Belgian community in Central Florida?

P: There are about ten couples within a 20 minute drive of the bar. Other than that, there’s a Belgian club in Miami with about 200 members. 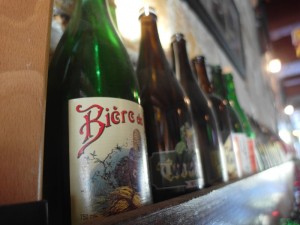 S: Does Orlando even have a Belgian beer bar?

P: I think there’s one on the east coast that carries a lot of Belgian beer, but not a true Belgian bar, no. In Florida, we’re the only one.

H: It’s called Coasters, and it’s in Melbourne, I believe. They do a sour fest once a year and get some pretty exclusive stuff. The closest other than that is a bar opening up in Jacksonville, which I gotta go burn down. (Laughter) Other than that, the nearest Belgian bar I know of is in Cincinnati, and then there’s the Monk’s Café I believe in Philly.

S: Wow. So based on what you’re telling me, you’re one of the only Belgian beer bars in the entire country, or at least in the eastern half of the US, and that the most similar concept is in Jacksonville, which is a huge metropolitan area compared to Sanford. And it’s not even a pure Belgian beer bar.

H: I’ll say this a lot, that there’s a lot of places that sell Belgian beer, but there are very few Belgian beer bars. And even if your bar sells exclusively Belgian beer, you’re not going to find a Paul or Percy or me serving it, or even someone who speaks the language. I think one of the coolest things is when the Belgians in this area get together, and everyone behind you is speaking Flemish. You feel like you’re traveling in Belgium because the only people who are speaking English are you and your friends. 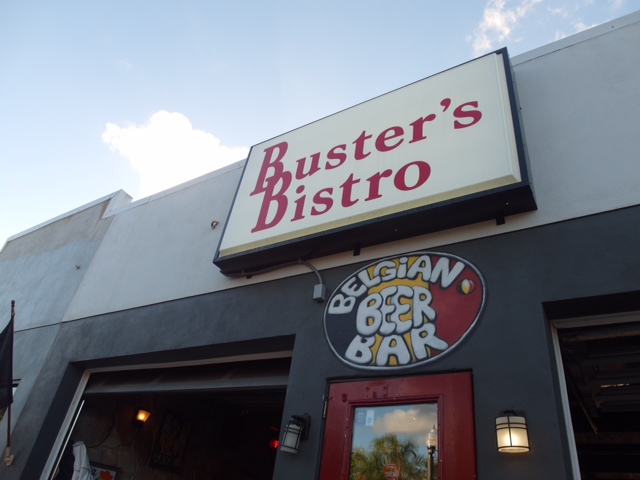 S: So why open in Sanford?

H: When Paul and I first met, I worked at another bar and he came in talking about opening a Belgian beer bar, very high specialty, even to the point where every beer came with snacks and on a platter and all that stuff. A specialty bar like that, no matter where you put it, you’re going to have to establish your own market. This is just something we sort of accepted. When he was looking for locations, he mentioned a few places like Winter Park, Altamonte, Longwood, and the real estate prices are much higher there. The way I looked at it was that if we’re going to spend so much time building our own market anywhere, we might as well go somewhere we liked the community and that is more reasonable. 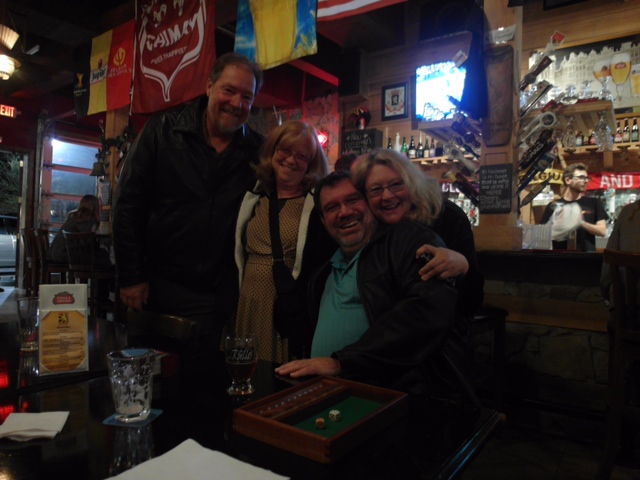 S: How do you feel Sanford has responded to having a Belgian beer bar?

H: It’s actually been great. I mean, the first six months we were open, we had two or three people coming in here a week telling us we were going to be out of business in two months because we didn’t have Budweiser on tap. That’s not a lie, they actually told us this. And we refused to change, we actually talked out it–

P: You refused to change. I talked about it.

H: There’s always that moment when it comes down to paying bills, and a lot of people will change their concept. It’s not a change, it’s a sacrifice. When you start with a vision and you make changes to accommodate a certain group of people, you are taking away a piece of that business. We refuse to ever falter on that, and it’s been great. The first six to eight months were a little slow, but we established regulars. I think a big difference between us and the other bars is that at most places, you get a beer, end of transaction. We have to educate our customers and show the value in our products. We explain why the beers are so special, how hard they are to get. There are beers up there that are one time release batches, and some are made by families of five in Belgium, and they make it all the way across the Atlantic ocean to here. We explain those things, and our customers have developed a huge appreciation for it. Especially with the help of the World Cup, it’s just been killer. It’s been awesome. 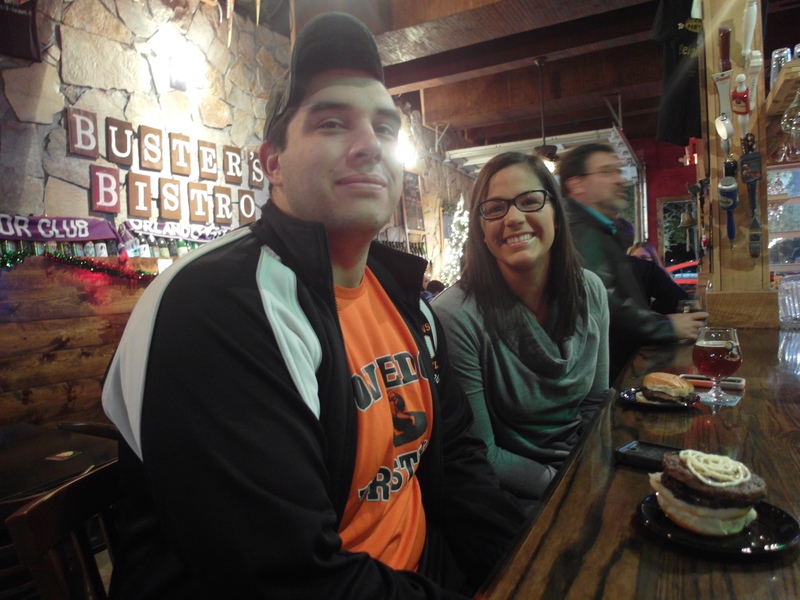 S: What other challenges have you faced opening up in Sanford?

H: One of the biggest challenges was the streetscape. We couldn’t get customers into the bar without making them walk at least a block.

P: The streetscape could have been really, really bad. We just made the best of it. We did, Shantell did, everyone around us was like, “Yeah, let’s jump on this”, and so we had street parties, which was awesome. It was just making the best of a bad situation.

H: We even played pétanque, which is basically like a bocce ball game. We played on an open street with a bunch of other bars from Orlando. Word starts getting around that we’re having a hard time with the streetscape and after a while, we didn’t see any dip in sales at all. I think that goes back to what I said about establishing your own market. Location doesn’t matter, transportation doesn’t matter. If you have a concept that’s worth it, people will travel.

So having made it through some fat and lean times since opening, Buster’s is still bounding ahead. In the new year, they are moving to a new location one block away, which comes with some big changes. 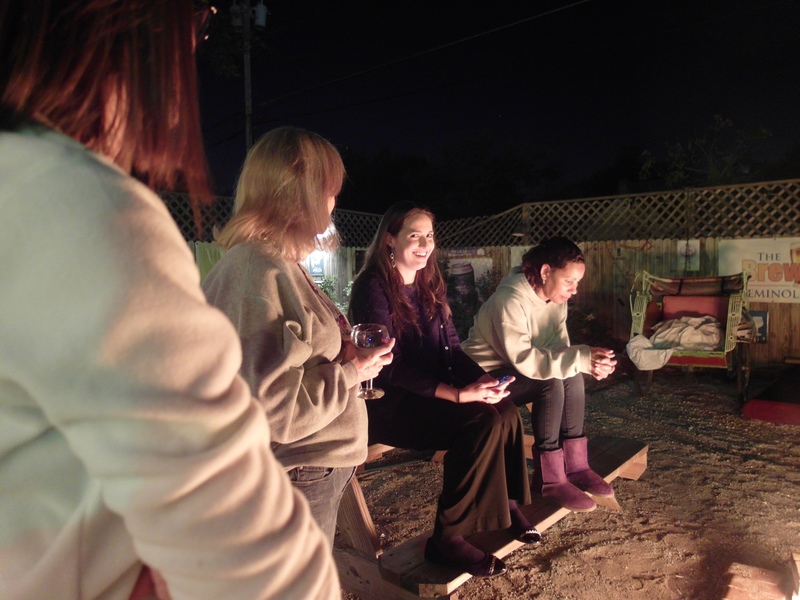 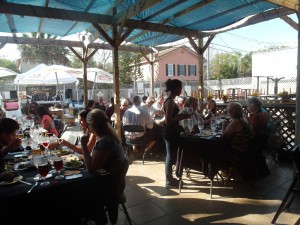 The biggest and most important change, Harry said, is the new kitchen. Buster’s has hosted several benefit dinners with Chef Hari of Cress, in which guests purchased a five course meal to pair with Belgian beers. The last dinner raised $4000 for the Princess Theater, and guests were over the moon about the food. Currently, the bar serves gourmet meat and cheese plates, and homestyle meals like goulash and vol-au-vent every night. Foodies get a special treat every Thursday, when Harry cooks up a gourmet special, often with ingredients like Berkshire pork or Australian lamb– for $15. However, the limitations of their current kitchen don’t allow them to serve the food they want or as often as they would like. As Paul said, “People love our food, but no one comes here to eat.” They intend to change this in the new place, making Buster’s a destination for not only great beer, but also great food. “There’s no gap in the nightlife here. Foodwise, the options we have are good, but there are still gaps to be filled,” Harry said. “With the new kitchen, we’re hoping to help fill some of those gaps.” 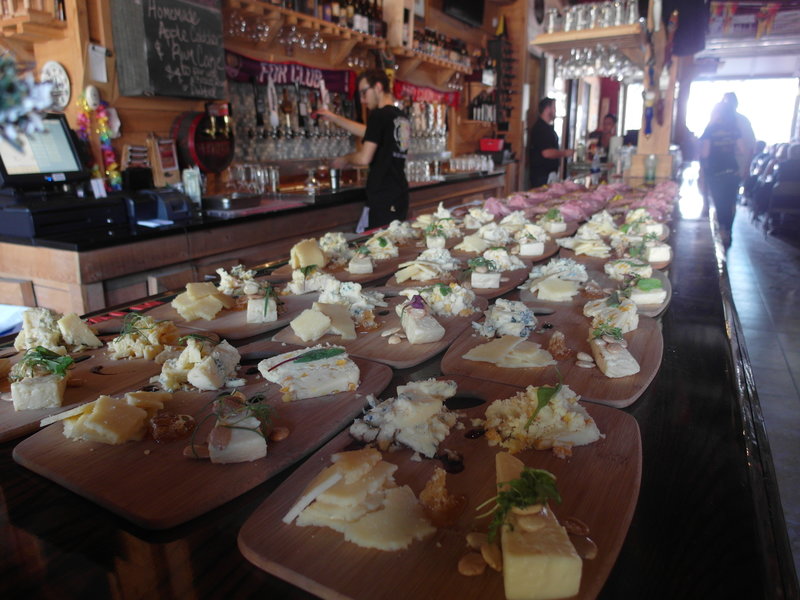 While their current location boats 18 taps of lovely Belgian brews, the new bar will have even more, along with new delivery methods. “Without boring you from a logistics side, we’ve got a few more taps that we’re going to install, and more tap towers, which are more traditional,” Harry said. “We’re hoping to put in a beer engine, which is an English delivery method, but it adds a completely different mouthfeel. This will allow us to get a few more unique products when they come into season,” Harry said. Paul added that they will also have keg tapping parties to add another interactive event to the mix. 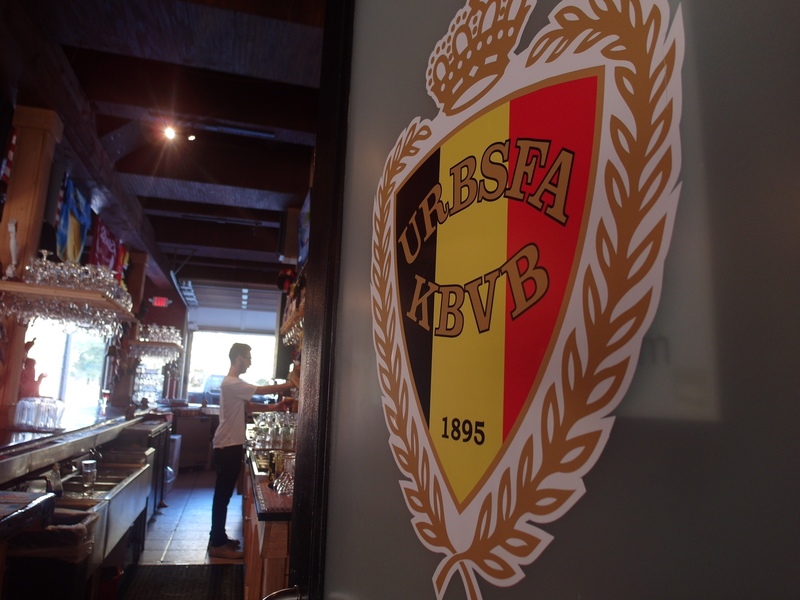 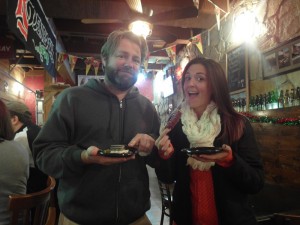 Buster’s popularity currently has them bursting at the seams on busy nights, and for huge Euro-centric events like the World Cup, it can get (to borrow a phrase from Harry) “completely bonkers”. The new Buster’s will be about three times the size of the current bar, and will feature an open floorplan. “What we have now is cozy, which is kind of nice, because everyone ends up being best friends. But with a little bit more open concept floorplan, hopefully we can keep parts of that without forcing people into it.” Paul is also excited to build a true beer garden to enjoy the beautiful Florida weather. As Harry said, “It’s going to be bigger, better, faster, stronger than what we have now.”

With so many good things ahead, it’s amazing that these two have time to sit around discussing their business plans with little ole me, but that’s why I love them. Life at Buster’s really does run on relationships, and I’m so happy to see the crew take this to the next level.

The new Buster’s location is at 310 S. Sanford Ave, and is slated to open in January. You can direct questions to Paul and Harry on the Buster’s Bistro Facebook Page. 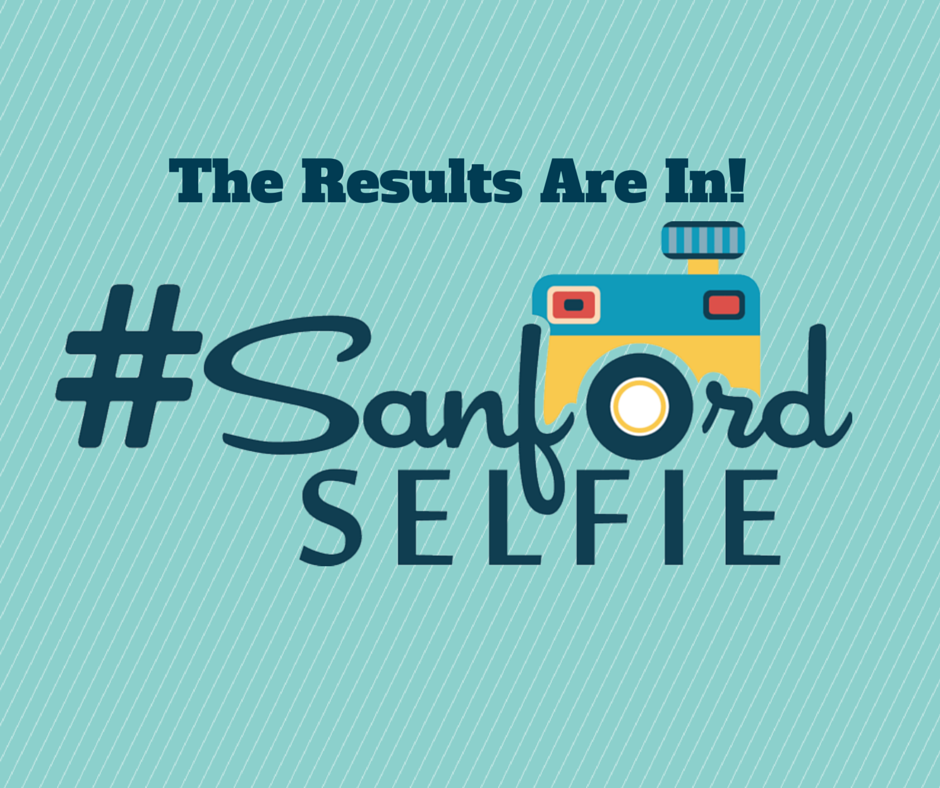 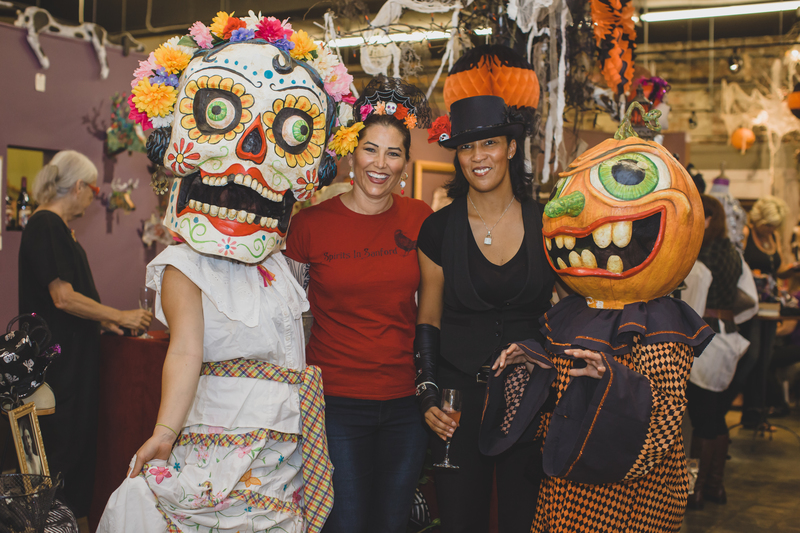 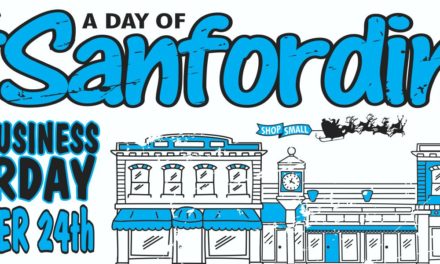